Fine-scale genetic research has confirmed two distinct populations of tiger sharks in the Atlantic and Indo-Pacific oceans that have evolved separately despite trans-oceanic migrations and the potential for mixing. Fisheries management must consider and conserve this diversity.

Geneva, Switzerland, 28 September 2021_A tiger shark’s life history is one painted with broad brush strokes. These sharks are generalists of the boldest kind. Found in tropical and subtropical seas worldwide, they live in a range of ocean habitats from shallow coastal waters to mysterious depths far offshore. Their diet is equally unfussy and has become the stuff of legend, its menu of marine mammals, fish, seabirds and other sharks peppered with garbage and terrestrial animals, according to some reports. Everything points to the kind of shark that can travel widely, mix freely and therefore (in theory) interbreed. We would expect populations to be similar to one another.

However, new research published on 10 August 2021 in the Journal of Heredity, with Dr Andrea Bernard from Nova Southeastern University as the lead author, confirms the opposite: that tiger sharks in the Atlantic are genetically very different from those in the Indo-Pacific Ocean.

‘These results mean that Atlantic and Indo-Pacific tiger sharks, despite their ability to travel vast distances, have not intermingled to reproduce for a long time,’ explains Professor Mahmood Shivji, the director of the Save Our Seas Shark Research Centre (SOSF-SRC) and a co-author of this study. ‘This long-term separation between Atlantic and Indo-Pacific tiger sharks has resulted in them developing into separate populations, each with its own unique genetic diversity,’ he says.

The study also confirmed findings that tiger sharks from Hawaii, one of the world’s most geographically isolated archipelagos, are genetically different from Indian Ocean tiger sharks.

The SOSF-SRC focuses on employing cutting-edge science to improve the conservation of sharks and rays. Its speciality lies in using genetics to understand these species and apply new knowledge to improve their protection. As its director, Professor Shivji has to consider what shapes their mission.

‘A guiding principle for our work is to focus primarily on shark species that are of high conservation concern. We spread our work across both discovery research questions (for instance, understanding how sharks function) and applied conservation research (for instance, understanding interactions between shark migration patterns and fisheries or investigating trade in shark parts). The important point is that all of this information advances our knowledge of sharks and informs conservation.’

Tiger sharks are essential players in the ocean system, but their way of life throws them into the path of fishing vessels. Their home is also changing rapidly; climate change, pollution and habitat destruction mean that for species to survive, they need to adapt – and fast.

‘Overfishing poses a clear danger to sharks. The genetic diversity in overfished species will inadvertently be diminished and they won’t adapt to the fast pace of environmental change,’ confirms Professor Shivji. ‘Compared to other fish species, tiger sharks occupy an unusually wide variety of habitats. Given their influential ecological role and their widespread movements that expose them to a variety of fisheries, science-informed fisheries management of tiger sharks is important to achieve global conservation goals.’

The researchers in this study were able to scrutinise the structure of tiger shark populations at a finer resolution than is usual. Instead of being reliant on mitochondrial DNA (the DNA found in the energy-making mitochondria that power our cells and are only inherited through mothers), the study used genome-scale (the full genetic information apparent in an individual) single nucleotide polymorphisms (SNPs). ‘SNPs repeat across the entire genome,’ explains Professor Shivji.

‘This increases the amount of information for geneticists to work with relative to previous surveys that were limited to small subsections of genetic information.’

The result is much higher precision in distinguishing which tiger shark populations are genetically distinct.

With what we now know, the Atlantic and Indo-Pacific tiger shark populations will need tailored management plans and, concludes Professor Shivji, ‘targeted conservation efforts to preserve their genetic diversity and potential to survive rapid changes occurring in our oceans’. The study recommends that international fishery management of tiger shark populations consider the Atlantic and Indo-Pacific populations as separate and that a targeted conservation plan is devised for Hawaiian tiger sharks.

The more we know about sharks, the better we are able to refine our own behaviour, policies and management interventions to suit their particular challenges.

‘Tiger sharks are part of not only the ocean’s overall health, but also its beauty and wonder. Our ongoing mission at the SOSF is to know more in order to do better by these species and their ocean home. Improving our insights into tiger sharks is ultimately linked to our health and well-being,’ says the founder of the SOSF, His Excellency Abdulmohsen Abdulmalik Al-Sheikh.

If our understanding of tiger sharks had remained that populations are similar wherever they are found across the oceans, we might have stood to lose their true diversity and undermined their resilience as a powerful and ancient species. 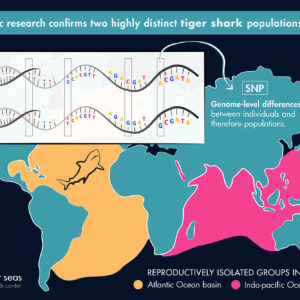 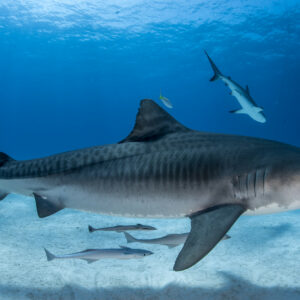