Cape Town, South Africa, 30th of September 2020_ The Two Oceans Aquarium is proud to announce that it has joined forces with the international philanthropic organisation the Save Our Seas Foundation to increase awareness about sharks in order to protect and conserve these much-persecuted animals.

The Aquarium’s largest exhibit, the Predator Exhibit, which houses five ragged-tooth sharks as well as other fish species, has been renamed the Save Our Seas Foundation Shark Exhibit. The two organisations will collaborate to increase communication efforts about marine conservation and research specifically related to sharks. This partnership also includes the development of Shark Alley, a shark information space behind the Save Our Seas Foundation Shark Exhibit, which will highlight charismatic shark species, shark biology, sharks under threat, shark-human relationships, and will provide other learning opportunities about sharks.

“We have a long history of supporting projects in South Africa, and this new partnership adds to our extensive programme. The Save Our Seas Shark Education Centre (SOSF-SEC) in Kalk Bay, Cape Town, is at the heart of our activities in South Africa, and we also have long-term partners in the Shark Spotters in Muizenberg and the Acoustic Tracking Array Platform in South Africa’s coastal waters. The SOSF-SEC connects people of all ages from local communities to the marine environment through engaging education programmes that focus on sharks and the marine ecosystems of False Bay. Our goal here is to nurture an awareness of just how important the ocean is, while promoting environmentally responsible actions and a healthy respect for sharks. Our partnership with the Two Oceans Aquarium is very much aligned with the Save Our Seas Foundation’s overall mission which is to support research, conservation and education projects worldwide that focus primarily on endangered species of sharks, rays and skates,” continued Dr Lea.

Sharks have existed in the oceans for millions of years yet populations of various shark species have declined by 90% in recent years. It is estimated that as many as 100 million sharks may be killed by humans every year. They are targeted for their fins, meat, skin, teeth and cartilage in commercial fishing operations, and are also caught as bycatch. However, the shark fin trade which drives shark fisheries is largely unregulated and illegal. Sharks caught in South African waters are being exported to other countries for consumption as there is little consumption of sharks in South Africa itself.  Shark populations are also being negatively affected by climate change and habit loss.

As predators, sharks play a pivotal role in maintaining healthy marine ecosystems. The removal of sharks from the ocean can have unpredictable knock-on effects on the overall balance of marine ecosystems and may drive them closer to collapse. A collapse of this magnitude would result in the loss of essential food resources, job opportunities, biodiversity and will ultimately negatively impact on the ocean’s ability to function as a life support system for the planet.  By protecting and respecting sharks, and educating around the plight of sharks, we can ensure that the marine ecosystem as a whole is afforded greater protection and respect.

“This year’s WWF Living Planet Index highlights the devastating fact that animal populations have declined by 68% since 1970. This decimation of wildlife populations, both terrestrial and aquatic, by human activities is resulting in a loss of biodiversity and irrevocably changing ecosystems. Biodiversity and healthy ecosystems are the cornerstones of a healthy planet and key to human survival. Our vision at the Two Oceans Aquarium is an abundant and healthy ocean and our mission is to inspire action for well-being of the ocean. By partnering with the Save Our Seas Foundation we can substantially increase our efforts in education and conservation specifically with regards to sharks and contribute to the protection of marine biodiversity and ecosystems – this aligns perfectly with our vision and mission. We are therefore extremely pleased to have joined forces with the Save Our Seas Foundation,” said Michael Farquhar, CEO of the Two Oceans Aquarium.

For more information about the Save Our Seas Foundation:

For more information about the Two Oceans Aquarium:

ABOUT SAVE OUR SEAS FOUNDATION

Founded in Geneva, Switzerland in 2003, the Save Our Seas Foundation (SOSF) is a philanthropic organisation aimed at protecting and caring for the world’s oceans. Its support for research, conservation and education projects worldwide focuses primarily on endangered species of sharks, rays and skates. Three permanent SOSF research and education centres reinforce its action in South Africa, Seychelles and the USA.

Over the last 16 years, SOSF has supported some 300 projects in more than 60 countries, passionately upholding the founder’s plight to protect the population of sharks, rays and skates, whose presence is essential to the health and biological diversity of our seas.

THE SAVE OUR SEAS FOUNDATION – OUR STORY

The Save Our Seas Foundation (SOSF) is a philanthropic organisation committed to the care and protection of the world’s oceans. Focusing primarily on endangered shark and ray species, it encourages and supports cutting-edge research, conservation and education projects.

The Save Our Seas Foundation was founded in Geneva, Switzerland, on 23 September 2003 by His Excellency Abdulmohsen Abdulmalik Al-Sheik, a keen scuba diver with a deep passion for the marine environment. While exploring the world’s oceans over the past three decades, he has witnessed at first hand the severe impact of human intervention on marine eco-systems, especially on large predators like sharks. It was this that inspired him to help combat the threats faced by sharks and rays by setting up the SOSF, and His Excellency maintains an active role in the foundation, working closely with its management team.

The Save Our Seas Foundation’s ultimate goal is to create a legacy of securing the health and sustainability of our oceans, and the communities that depend on them, for generations to come. To this end, the foundation has supported more than 300 projects in over 60 countries around the globe over the past 15 years, passionately upholding the Founder’s wish for the foundation to make a real and lasting impact on the health of our oceans and ultimately for every person on the planet.

The southern tip of the African continent is the meeting place of two mighty and bountiful oceans, the Indian and the Atlantic. The Two Oceans Aquarium on the V&A Waterfront, Cape Town is ideally positioned to showcase the incredible diversity of marine life found in these two oceans. The Aquarium’s exhibits and displays have an educational focus, providing access to this unique natural world to more than 500 000 visitors per year, from near and far.

In addition to being an award-winning attraction, the Aquarium is also deeply invested in environmental education and campaigning, conservation, and research. In 2018 the Two Oceans Aquarium Education Foundation was established as a registered Public Benefit Organisation, making possible the expansion of its education, conservation and research programmes. 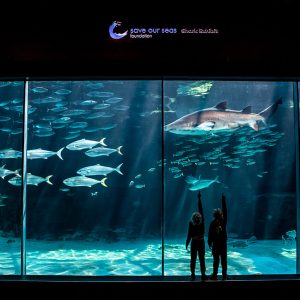 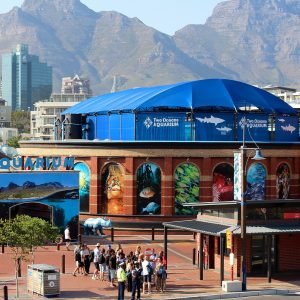