Geneva, Switzerland – 18 March 2020 – Two new species of shark are now known to science. They belong to a family of sharks known as sawsharks, named for their saw-like rostrums (elongated noses) that bear many sharp, needle-like teeth. The new species, named Kaja’s sixgill sawshark Pliotrema kajae and Anna’s sixgill sawshark P. annae, were found off the coasts of Madagascar and Tanzania respectively. These new taxonomic descriptions, which have been published in PLOS One today, increase the total number of sawshark species known to science from eight to 10. The study, led by Dr Simon Weigmann, involved a collaboration between several research institutions.

Co-author Dr Ruth Leeney of the Natural History Museum in London was a Save Our Seas Foundation (SOSF) project leader from 2015 to 2017. It was while she was conducting SOSF-funded field work in Madagascar in 2017 that Dr Leeney came across the first specimens of Kaja’s sixgill sawshark (known in Madagascar as vae vae). At the time she was in the south-west of the country looking for evidence of sawfishes, which are Critically Endangered relatives of sawsharks. ‘I got a report that a fisherman had caught a sawfish, but when the photograph appeared in my e-mail the next day, I could see that it wasn’t a sawfish, but a pair of sawsharks,’ remembers Dr Leeney. ‘Although it wasn’t the species I was searching for in Madagascar, it wasn’t every day that I had the chance to study these rarely seen sharks,’ she continues. The second new species was discovered by scientists who were documenting fish landings on the coast of Zanzibar in Tanzania.

At that point, only two sawshark species, Warren’s sixgill sawshark and the African dwarf sawshark, were known to occur in East Africa. By comparing the new specimens with those in London’s Natural History Museum and several other museums, as well as by implementing techniques used by taxonomists such as taking detailed measurements of the body and high-resolution photographs (using a scanning electron microscope), the scientists were able to confirm that both the newly documented species were previously unknown to science.

These new discoveries notwithstanding, sawsharks largely remain a mystery. They inhabit deep offshore waters and are seldom encountered by fishermen. Of the now 10 species, only three are listed by the IUCN as having a stable population trend; scientists simply do not have enough information about the others to determine their conservation status. It is also impossible to know how sawsharks will fare, given the global threats facing marine wildlife in general, such as ocean plastics, overfishing and increasing water temperatures. There is also no understanding of the role that sawsharks play in deep-sea ecosystems.

The SOSF sponsored the publication of Weigmann and Leeney’s paper in PLOS One as part of its commitment to making shark and ray research more accessible. ‘The Save Our Seas Foundation strives to ensure a stable future for threatened marine life by supporting innovative research projects around the world,’ says SOSF CEO Dr James Lea. ‘The work of project leaders like Ruth and her colleagues is critical for achieving this goal. It is remarkable that we are still discovering new species of shark, but the fact that we are doing so through fisheries highlights how quickly we will need to learn if we want to protect these vulnerable animals,’ he concludes.

Details of the paper:

Published in PLOS One.

Title: Revision of the sixgill sawsharks, genus Pliotrema (Chondrichthyes, Pristiophoriformes), with descriptions of two new species and a redescription of P. warreni Regan. 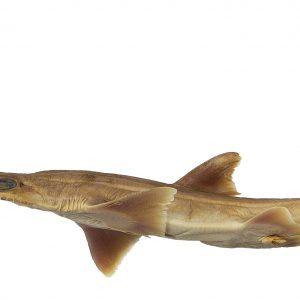 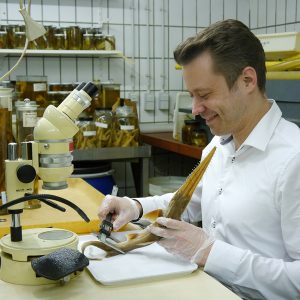