FORT LAUDERDALE/DAVIE, Fla. – 15.09.2020 –  They are some of the most iconic and unique-looking creatures in our oceans. While some may think they look a bit “odd,” one thing researchers agree on is that little is known about hammerhead sharks. Many of the 10 hammerhead shark species are severely overfished worldwide for their fins and in need of urgent protection to prevent their extinction.

To learn more about a declining hammerhead species that is data poor but in need of conservation efforts,  a team of researchers from Nova Southeastern University’s (NSU) Save Our Seas Foundation Shark Research Center (SOSF SRC) and Guy Harvey Research Institute (GHRI), Fisher Finder Adventures, the University of Rhode Island and University of Oxford (UK), embarked on a study to determine the migration patterns of smooth hammerhead sharks (Sphyrna zygaena) in the western Atlantic Ocean. This shark, which can grow up to 14-feet (400 cm), remains one of the least understood of the large hammerhead species because of the difficulty in reliably finding smooth hammerheads to allow scientific study.

“Getting long-term tracks was instrumental in identifying not only clear seasonal travel patterns, but importantly, also the times and areas where the sharks were resident in between their migrations,” said Ryan Logan, Ph.D. student at NSU’s GHRI and SOSF SRC, and first author of the newly published research. “This study provides the first high resolution, long term view of the movement behaviors and habitats used by smooth hammerhead sharks – key information for targeting specific areas and times for management action to help build back this depleted species.”

The researchers found that the sharks acted like snowbirds, migrating between two seasonally resident areas – in coastal waters off New York in the Summer and off North Carolina in the Winter. Their residency times in these two locations coincided with two environmental factors: warmer surface water temperatures and areas with high productivity – indicative of food rich areas.

“The high resolution movements data showed these focused wintering and summering habitats off North Carolina and New York, respectively, to be prime ocean “real estate” for these sharks and therefore important areas to protect for the survival of these near endangered animals,” said Mahmood Shivji, Ph.D.,director of NSU’s GHRI and SOSF SRC, who oversaw the study.

Identifying such areas of high residency provides targets for designation as “Essential Fish Habitat” – an official title established by the US Government, which if formally adopted can subsequently be subject to special limitations on fishing or development to protect such declining species.

The tracking data also revealed a second target for conservation. The hammerheads spent a lot of resident time in the winter in a management zone known as the  Mid-Atlantic Shark Area (MASA) – a zone already federally closed for seven-months per year (January 1 to July 31) to commercial bottom longline fishing to protect another endangered species, the dusky shark. However, the tracking data showed that the smooth hammerheads arrived in the MASA earlier in December, while this zone is still open to fishing.

“Extending the closure of the MASA zone by just one month, starting on December 1 each year, could reduce the fishing mortality of juvenile smooth hammerheads even more”, said Shivji. “It’s particularly gratifying to see such basic research not only improving our understanding of animal behavior in nature but also illuminating pathways for recovery of species and populations that have been overexploited so we can try and get back to a balanced ocean ecosystem”.

The tracks of the smooth hammerheads (and other shark species) can be found here:

The teams’ complete research paper can be found ONLINE.

Be sure to sign up for NSU’s RSS feed so you don’t miss any of our news releases, guest editorials and other announcements. Please sign up HERE. You can also follow us on Twitter @NSUNews.

About Nova Southeastern University (NSU): At NSU, students don’t just get an education, they get the competitive edge they need for real careers, real contributions and real life. A dynamic, private research university, NSU is providing high-quality educational and research programs at the undergraduate, graduate, and professional degree levels. Established in 1964, the university includes 15 colleges, the 215,000-square-foot Center for Collaborative Research, the private JK-12 grade University School, the world-class NSU Art Museum Fort Lauderdale, and the Alvin Sherman Library, Research and Information Technology Center, one of Florida’s largest public libraries. NSU students learn at our campuses in Fort Lauderdale, Fort Myers, Jacksonville, Miami, Miramar, Orlando, Palm Beach, and Tampa, Florida, as well as San Juan, Puerto Rico, and online globally. With nearly 200,000 alumni across the nation and globe, the reach of the NSU community is worldwide.  Classified as having “high research activity” by the Carnegie Foundation for the Advancement of Teaching, NSU is one of only 50 universities nationwide to also be awarded Carnegie’s Community Engagement Classification, and is also the largest private institution in the United States that meets the U.S. Department of Education’s criteria as a Hispanic-serving Institution. Please visit www.nova.edu for more information.

About the Save Our Seas Foundation:  Founded in Geneva, Switzerland, in 2003, the Save Our Seas Foundation (SOSF) is a philanthropic organization that aims to protect and care for the world’s oceans. Its support for research, conservation and educationprojects worldwide focuses primarily on endangered species of sharks, rays, skates and their habitats. Three permanent SOSF research and education centers reinforce its action in the Seychelles, South Africa and the U.S.A. Over the past 17 years, the SOSF has supported some 300 projects worldwide, passionately upholding the Founder’s pledge to protect the populations of sharks, rays and skates whose presence is essential to the health and biological diversity of our seas. Please visit saveourseas.com/sosf-shark-research-center for more information. 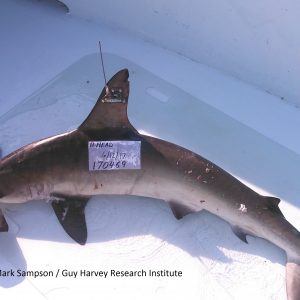